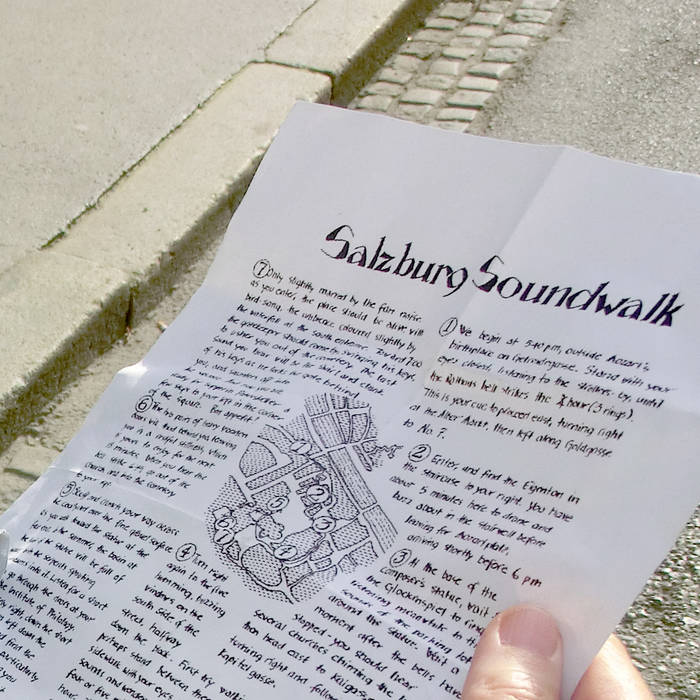 There exists a map published in 1978, a tidy little hand-drawn map of the center of the Altstadt of Salzburg, crowded with handwritten instructions regarding when, where and why to be at each of seven locations during a stroll of about an hour and a half, providing suggestions of ways to be engaged with various environments as an active, critical listener and soundmaker.

This map is familiar to many people—and most likely anyone connected with sound studies and the practice of sonic exploration known as soundwalking. It was first published in the book "European Sound Diary", a product of the World Soundscape Project, edited by composer and noise activist R. Murray Schafer. That volume is quite rare, even compared to other WSP publications, but the map was reprinted in the much more widely available "Music of the Environment Series No. 5", or "Handbook for Acoustic Ecology", published by A.R.C. in 1978 under editor Barry Truax. An online version of the Handbook is readily available today and the map may be viewed here: www.sfu.ca/sonic-studio/handbook/Soundwalk.html.

From the perspectives of our different areas of study (Music and Geography), we have been introducing undergraduate and graduate students to soundwalking since the mid-1990s. While there are many ways to approach the exercise, we have favoured the map-based approach, and inevitably the 1978 Salzburg Soundwalk was held up over and over again as an example that students might use in creating their own. We did this without ever having walked the Salzburg map ourselves.

In the summer of 2015, we found ourselves in Salzburg, visiting friends making an installation of Composers Inside Electronics' "Rainforest" at the Museum der Moderne. We had great fun with them on a sequence of stormy nights, looking out from the Museum's artist residence which rides like a castle tower above the city, listening with our parabolic microphone out into the storms and the streets of the Altstadt far below. On our last day in the city, we realized: we had been teaching a guided tour of old Salzburg 1978 for years, and here now was an opportunity to actually follow the soundwalk map ourselves, 37 years later. Could it be done? In a place like the Altstadt, were sonic traditions so ingrained that the timings and instructions would still make sense? The starting point for the walk is still easily found: Mozart's birthplace, at 5:40pm. But would we be able to hear all the bells mentioned, some of which are sonic cues to keep the walk on schedule? Would we be able to enjoy finding an eigenton in the hallways of the Department of Philology? Would our experience entering St Peter's cemetery still be "slightly marred" by the noise of a ventilation fan? Would the windows on Kapitelgasse still be humming and buzzing, 37 years later?

This album is the full, uncut recording of our walk on July 17 2015, separated into "tracks" relating to the numbered locations on the map. The "addendum" track for location 5 is included because we had to revisit the location the following day: it was unexpectedly off-limits the previous afternoon due to preparation for an outdoor performance.

Tracks are roughly separated into travel and talk between locations, and stationary experiences of the locations proper, with little or no commentary.